Proposal for a White House Council on Boys and Men

The President is requested to announce the establishment of a White House Council on Boys and Men, this request flows from a group of thirty-four national-class scholars and practitioners led by Dr. Warren Farrell.

All the facts in this Executive Summary are documented in the proposal and endnotes that follow.

Boys are more medicated and less educated. They are considerably behind girls in reading and writing, motivation, grades, and standardized test scores. More boys are dropouts and expelled. In higher education, as this graph reveals, males have gone from 61% of graduates to a projected 39%. 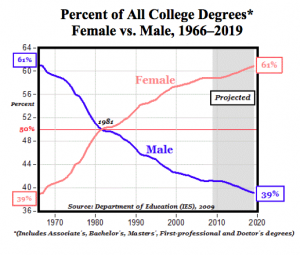 Among Hispanics and African-Americans, the male-female gap is greater. As for consequences, by his mid-30’s, the African-American boy who drops out of high school has a 60% chance of having spent time in prison.

Solutions a Council might explore include more male teachers; updated teacher education; boy-friendly teaching, testing and schools; and incentives for children having both parents.

Boys’ suicide rate goes from equal to girls’ prior to adolescence to five times girls’ between 20 and 24. Among the elderly, men over 85 have a suicide rate 1300% higher than their female peers. Other symptoms of male emotional challenges range from ADHD to violence, crime and the 5 D’s: depression, drinking, drugs, disobedience and delinquency. A Council might proffer such solutions as parent and professional education, communication and relationship-skill training, and encouraging mentoring and two-parent families.

With one out of three children in the U.S. living in father-absent homes, the Commission examined the potential benefits of more-involved dads to single mothers, and to our children’s emotional stability, academic achievement, social maturity, physical safety, and future marital success. It examines the possible impact of fathers on the reduction of social problems from poverty to unwed births and crime. It considers solutions ranging from examining the impact of paternity leave (e.g., in Sweden, 85% of fathers take paternity leave) to the potential of a male birth control pill; from legislation to create incentives for father involvement in unwed and divorced families to educating boys in school as to their value as future dads.

The Commission examines why the male-female life expectancy gap has grown from one year in 1920 to more than five years today. And why boys and men die earlier than girls and women from nine of the 10 leading causes of death.

The proposal cites the economic costs of neglecting boys and men’s health, from the cost of emergency room use to the cost to women (e.g., half of elderly poor women were not poor before their husband’s death).

One of every five men 25 to 54 is not working. Half of African-American young men ages 20- 24 are jobless. The areas of future job growth (e.g., health; education) are areas our daughters are preparing for; the areas for which uneducated boys have typically found jobs (e.g., manufacturing; agriculture; construction) are in decline. And the mostly-male jobs requiring more education are being outsourced overseas.

A White House Council on Boys and Men would examine the potential for restoring vocation to education, and for developing our sons’ (and daughters’) skills to match employers’ future needs. It can expand the concept of a “man’s work;” and study other countries’ successes. And when men do work, it can recommend ways to increase safety (92% of workplace deaths are men).

The Commission concludes that our sons face a profound crisis in education, work, and their physical and emotional health. Respected publications such as The Atlantic have seen the symptoms and predict “The End of Men.” If the symptoms are ignored, and our sons see the “end of men” as their future, they will have little inspiration for life’s journey.

Solutions may need to go beyond more fathers, mentors and male teachers. They may require a fundamental reconsideration of what it means to be a man. In the past, we taught our sons to consider themselves “real men” if they did what was healthy for society’s survival—whether to risk death in war, or to build a railroad. Calling our sons heroes if they risked being disposable was often healthy for the society, but it is unhealthy for our sons.

The Council can provide leadership to sustain the respect for firefighters and soldiers that allows us to recruit protectors for our homes and country, even as we also encourage alternative paths to becoming a valued man. Leadership for the future must both question and honor traditional masculinity.

As our history of male-as-sole-breadwinner fades as downsizing and outsourcing burgeon, both sexes will need to be prepared to raise money and raise children. Our daughters have learned to do both; our sons have not.

A White House Council on Boys and Men can co-ordinate the nation’s best efforts to parent, mentor, and teach each of our sons to discover who he is. It can end the era of boys and men as a national afterthought. It can provide leadership to raise young men that our daughters are proud to love.