Component 4: The Crisis of Boys and Men’s Physical Health

“Being male is now the single largest demographic factor for early death. If you could make male mortality rates the same as female rates, you would do more good than curing cancer.”
—Randolph Nesse, Professor of Psychology, University of Michigan

American men die earlier of nine of the 10 leading causes of death, including heart disease, cancer, and diabetes.

The visibility of boys and men’s health problems is sometimes clouded by suggesting men are responsible for neglecting their own health. And there’s truth to that. Men, for example, are more likely to be uninsured than women.171 The reasoning goes: “If they won’t care for themselves, why should anybody else?” But just as we wouldn’t ignore African Americans’ health problems because they have high rates of smoking and drug abuse, neither should we ignore men’s staggering health deficits.

When women were underrepresented in math and science, we challenged ourselves to look for the underlying reasons. And we promised in the Introduction to do that with boys and men. We will see in the Conclusion how men were rewarded for taking risks—for risking their own disposability. Among the rewards was the greater marital eligibility of a war hero, a sports hero, or a working class man who took a hazardous job to feed his family.

Whatever the underlying reasons, the first job of a White House Council on Boys and Men is to understand those reasons, and look for solutions that encompass them. Male healthcare is overdue for a full diagnostic workup and significant intervention.

The Economics of Neglecting Men’s Health

It is estimated that more than 375,000 American lives would be saved in a single year if men’s risk of dying was as low as women’s.173

Men’s premature death not only ends their life; it also hurts women and children. For example, the U.S. Administration on Aging found that over half of elderly poor women were not poor before their husband’s death.174 Widowed women are at least three times as likely to live in poverty compared with married women of the same age.175

When men do present to the healthcare system, it is often because of trauma, injury, or clinical crisis rather than routine health maintenance and screening. Consequently, their care is delayed, more expensive, and less effective, and may leave them with the unwarranted but understandable impression that healthcare is, in fact, catastrophic care.

It needn’t be that way. In part because of Office of Women’s Health efforts, more women today focus on preventive care and health maintenance, rather than the male standbys of denial followed by a panicked trip to the E.R. 176

To do something similar for men would not only help them and their loved ones, it would help control health care costs. For example, cancer is estimated to have cost $243 billion in 2009.177 One-third of women but 50% of men will develop cancer.178 The disproportionate costs are staggering. With better preventive care and early detection, the lower cancer costs for men will save our health care system billions.

Health of Minority Men Not a Minor Problem

What a White House Council on Boys and Men Can Do

Prostate cancer. One in six men will develop prostate cancer.182 African-Americans are diagnosed 60% more often than white men and are twice as likely to die from it.183,184 Relative to the disease’s prevalence and complexity, NIH data suggests that prostate cancer is under- funded.185

Item. 70% of college football players anonymously report concussion-like symptoms in surveys after the season. (During the season, athletic trainers acknowledged concussions in only 6% of players.) 187

On the one hand, millions of boys love football—more than 3 million boys play football at the youth level (e.g., Pop Warner), and another 1.2 million play in high school. Many of life’s lessons, as Robert Kennedy once said, are there for the learning in football perhaps more than any sport. On the other hand, it is precisely these millions of younger boys who are much more susceptible to serious injuries, and our culture of “big hits produce big cheers” is intensifying. Tackling with heads up is much safer than tackling head-to-head, yet a YouTube clip <http://www.youtube.com/watch?v=Vf-qgqLqzds> shows 8-year-old boys still tackling with heads down.188

With all its virtues, football is worthy of particular consideration for a few reasons: it plays a primal role in the definition of masculinity for boys—not only for the millions who play, but for the greater number who quietly feel like failures as they watch their male peers get their parents’ applause, their peers’ respect, and the cheerleaders’ love; the pressure many boys feel to produce victories so others can live vicariously through those victories leaves many boys emotionally unable to rationally consider their long-term good for their short-term need for approval and love “prior to the age of consent;” finally, U.S. taxpayers pay billions of dollars supporting football in high school and in state-supported colleges—and therefore support both this developmental process and risk of life-deteriorating injury.

In 2010, the danger of football began to get mainstream recognition for the first time— extending the discussion to its danger to youth and high school football.189 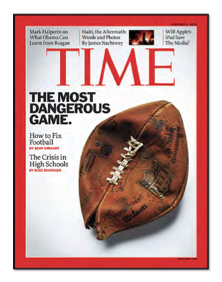 After years of denial, the N.F.L. allowed for a survey indicating that retired players ages 30 to 49 were 19 times as likely as their general population counterparts to have memory-related diseases.190 The New York Times reported new research finding “chronic traumatic encephalopathy—a disease caused only by head trauma that typically results in progressive cognitive decline—in the brain tissue of many deceased players.”191 Similarly, pro football careers are linked to concussions with higher rates of depression, mental decline and Alzheimer’s disease.

Until now, it has disproportionately been women who have taken the lead on this issue.192A White House Council on Boys and Men can explore ways football can become a safer option on the journey from boys and men. For example, flag football is safer and could be played by almost all boys.193 A Council can offer incentives for the development of safer artificial turfs and helmets, and introduce to high schools rules that create fewer injuries.

“Every society rests on the death of men.”

A nation that serves least those who serve us best is a nation that may win a war, but at the cost of its soul.

Michelle Obama’s pro-active efforts on behalf of military families have increased awareness of their dilemmas. Let’s take a look at how our neglect of veterans’ health—especially their mental health—affects all of us…

Item. A CBS investigation found that more U.S. military were killed by suicide in one year than were killed in the war in Iraq and Afghanistan in all years combined. 194

Item. In Afghanistan, there is only one mental health provider for every 1,123 soldiers.195

Item. Sixty percent of Vietnam combat veterans were psychiatric casualties. In 1978, over 400,000 Vietnam veterans were in prison, on parole, on probation, or awaiting trial.196

A culture that believes men are disposable will honor their disposability with monuments but not care for them once they’ve served their purpose. When men who have survived physically are not taken care of emotionally, here is the degree to which they risk, for starters, homelessness…

Homelessness among veterans. In Los Angeles alone, 20,000 homeless veterans walked the streets in 1990.197 Yet the Veterans Administration Center has fewer than 300 beds for them. Approximately 154,000 veterans are homeless on any given night, according to the Department of Veterans Affairs. While “Personality disorder discharges have…increased by 40% in the Army since the invasion of Iraq,” there has been a decrease in mental health workers: from 1 per 387, to 1 per 734 between 2004 and 2007.

Fathers returning after deployment or civilian contract work often walk into a home where the entire family has learned to function without them. They feel useless, unloved, unneeded, unappreciated, misunderstood. Moms and children have parallel feelings-that their way of loving and supporting each other is being “undermined.” Without offering extensive family counseling (including children) and couples’ communication, post-deployment becomes pre-divorce. When dads feel loved, desired and needed by their family, the effects of PTSD can be mitigated.

Many qualities our sons learn serving our country in war also serve them as parents and partners at home. For example, learning how to: adapt; serve others; deal with crises and emergencies; lead, and follow. And qualities such as loyalty, alertness, stamina and waking up as needed any time of night are necessary to the raising of children.

Other qualities are more functional in war than in love: in war, mistrust and paranoia are functional; at home, they are dysfunctional. Re-entry programs must help our veterans’ brain adapt to trusting.

War requires defining oneself as a hero by a willingness to sacrifice life; peace requires seeing heroism as supporting one’s family to live life. For example, if our son is in combat, unless he is dying, he would be ridiculed for crying and asking for help because attending to self would weaken his unit; in peace, our son must reignite his capacity to express emotions—and at times cry— and teach his son that a facade of strength is weakness.

In wartime, family therapy, couples’ communication training, and marital counseling distract from a focus on winning the war; returning from wartime, they’re necessary tools to help the soldier and family reunite.

Re-entry programs need to provide re-training to love at least as extensive as the veteran’s training to kill. This is especially true for soldiers who have faced combat. And for male soldiers. Why more so for men? We still give a lot more permission for a female veteran to cry and be emotionally distraught than for a male veteran. And preparing for war is still associated with masculinity to such a degree that only our 18 year-old sons must register for the draft or face prison and never be able to work for the government. This expectation is so internalized it is unquestioned by either sex or either party.

We need re-entry programs that train veterans to uncork emotions rather than liquor bottles; that prepare them for a home life rather than a prison life; that integrate fathers into families rather than pay the price of fatherless families.

Conclusion to the Boys and Men’s Physical Health Section

The cost of men going to emergency rooms rather than seeking preventive care is in the billions of dollars. The cost of men’s shorter lives, of dying earlier of nine of ten leading causes of death, and not taking care of our sons after combat? Priceless.

If we are to look more introspectively, though, at why we have several federal Offices of Women’s Health and no Office of Men’s Health for more than 99% of boys or men, or why we give lip service to equality and have male-only draft registration, or why 92% of workplace deaths are to men, we must muster the courage to dig beneath the symptoms…

Throughout human history, boys have learned to prove themselves men by calling it courage, duty, glory and honor to be disposable in war and at work. As long as we make this central to the definition of the transition from boyhood to manhood, our healthy sons will become unhealthy men. We will cheer for our son’s team to “kill” the other team, and cry when he gets a concussion without a thought that we contributed to his concussion. If we compound this with our dependency on boys and men to disproportionately die to defend our country or to mine our coal, we will be giving lip service to their better health and have an unconscious investment in not doing much about it.